Weighing just over 900 grams (2 lbs), the LU300e is LiveU's most compact and cost-effective HD contribution encoder, delivering mission-critical, ultra-low latency transmission over public IP, supporting point-to-point and point-to- multipoint video distribution for a fraction of the cost of other solutions. LiveU's range of point-to-point contribution encoders also includes the 1U rackmount LU610 and the multi-camera LU800e-PRO4.

The LU300e supports “Live & Store” mode, allowing you to go live under any network conditions while simultaneously recording locally a high-quality file of the live video. Files can be sent later, if needed, to any LiveU server.

EASY TO USE, INTUITIVE CLOUD-BASED MANAGEMENT

With a 2.2″ display, the LU300e offers excellent visibility under sunlight conditions. The unit can be easily controlled using its intuitive JOG controller or directly from the LiveU Control App. The LU300e can be monitored, controlled and managed via LiveU Central, the unified cloud-based management platform for LiveU’s field and studio units.

Make your production more efficient with our remote production tools, seamlessly integrated with the LU300e to ensure the most professionally- produced live broadcasts.

The LU300e can serve as a content source for the LiveU Matrix, allowing you to easily share your live feeds with members in your network or any other content partners.

FULL PRODUCTION IN THE CLOUD

Manage your live production from anywhere, leveraging LiveU’s all-cloud ecosystem! Seamlessly interconnect your live feeds from the field with any of your cloud-based production platforms, including Avid, Blackbird, Grabyo, Grass Valley and Vizrt for a richer live production.

LRT is the power behind all LiveU devices and software, used extensively for video contribution and backhaul, as well as worldwide video distribution over the public internet, delivering the highest resiliency over cellular and other IP networks. 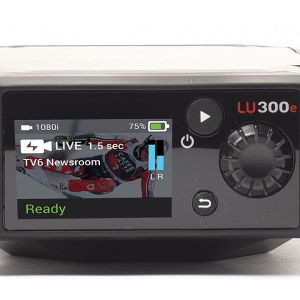